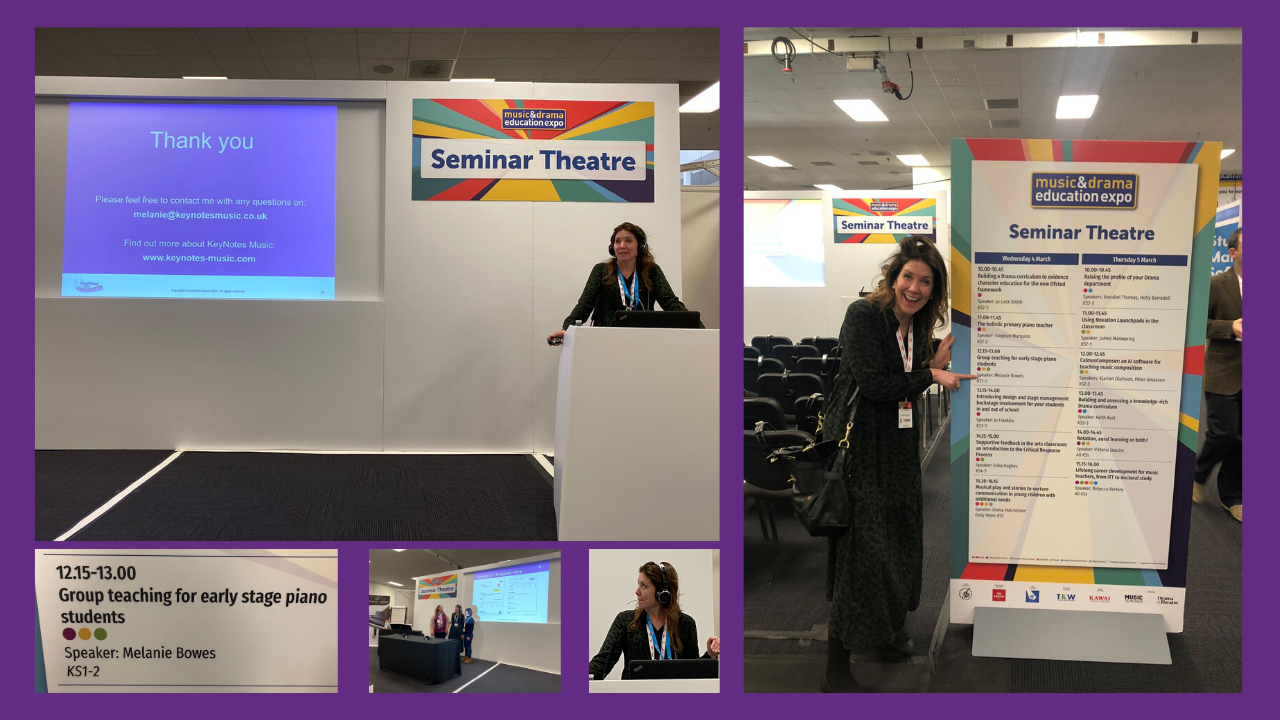 This has been a big week for KeyNotes and for group piano in general, as I took to the stage and presented a seminar about teaching early stages pianists in groups. I had 45 minutes to summarise a huge topic to an audience who were quite possibly new to the concept. What were the most important messages to impart over this 45 minutes and what was the best way to impart them?

Well I decided fairly quickly that video was going to help enormously in enabling delegates to visualise group piano (without which I fear they would struggle) and I decided to have a mix of action (but muted) videos that could be playing whilst I spoke, and video extracts of lessons that illustrated certain points, such as the joy of ensemble playing or the opportunities to learn creatively.

So I knew how I wanted to illustrate my messages but what exactly should those messages be?

Well first of all, I wanted to ask delegates to consider what the foundations of piano learning are. What do we want students to be able to do? What do we want them to know? We had a quick look at those foundational skills, and with each one, I showed either worksheets or videos of how we approach those skills in group piano.

I then went on to say that there are in fact more foundational skills that you can develop in group piano specifically, such as ensemble skill, knowledge and application of the musical elements, creative tasks such as comparing two versions of the same song, composing, improvising and generally broadening our students' music education to nurture the whole musician.

We looked at the benefits of group piano (in addition to the fact that you can develop those extra foundational skills) being that the group dynamic allows for social interaction and peer motivation, two areas that are key to students' educational setting in every other part of their lives; and being able to start them younger because the pace, structure and variety of activities are so suitable to this age group.

But there are also benefits for parents in that the lessons are more affordable and accessible, and we can offer support to many parents at the same time through practice videos etc.

Plus there are benefits for us teachers! We can enjoy a higher hourly rate, teach more students in less time and make more impact. I teach 108 students from one very small area, and there is no way all of those children would be able to access one-to-one lessons, there wouldn't be enough teachers for a start! But also parents have told me they actually think their children wouldn't be suited to private lessons for a variety of reasons.

Lastly I spoke about some of the concerns that can crop up when you start considering, or even begin teaching your group lessons.

The first is that groups could potentially be incredibly inflexible in terms of the make-up of the group and who is in it. I started my first term with four in a class but knew that I wanted to move to eight in my second term (semester). But how could I add new children into the class when four had already been learning for a term and had no doubt grasped some of the basics already? Music learning can be so linear that there would be some important basics missed off for late starters.

My solution was to create a cyclical curriculum. So there are five workbooks in each level; each workbook lasts a term/semester and has a set of objectives, with a list of skills that should be secure before moving on to the next level. Because the workbooks all have the same objectives (albeit with different topics/stories and pieces), students are constantly re-visiting, consolidating and mastering skills and objectives. And when they are secure, they move on to new objectives (and a new level).

My second concern was regarding progress rates. How would I provide stretch and challenge to all individuals within the group, ensuring that no-one is left behind but no-one is held back. So I took the delegates through my system of differentiation, where we have difficulty levels for each piece, and I even had some audience members up to be the three different students (one who had been learning for a while and was playing independent hands together, another who had only recently started and would just play Cs and Bs and one who could play hands together in octaves).

Lastly we discussed technique and the difficulty of developing solid technique when using keyboards (although I know that this isn't an issue for everyone!). I went through different activities, songs and pieces that we use to address technique, but I also laboured the point that we are giving many children a love of the piano, and of music, and so there is plenty of time to learn on an acoustic piano when students have all their foundational skills in place.

I had such a wonderful time presenting this seminar and I hope that teachers felt inspired to think about starting their own group piano lessons.

From general conversations I had with teachers, and from feedback that I got from them, they certainly felt that there is a gap between the early years music programs that are so readily available for children, and the start of private instrumental lessons, which may not be until age 6 or 7. So you have roughly 3 years where there are very few musical opportunities for children but where they are at their most receptive to learning (they soak up new skills and knowledge like sponges!). And that even if you want to teach privately at more advanced levels, you can certainly begin students in groups.

They were also very interested by these two ideas of differentiation and cyclical learning. These are both key to the success of group piano (and essentially to all educational settings) and ensure that students are having the most individually tailored learning experience with the benefit of a collaborative learning situation.

I myself was so inspired by being in an environment with so many other music teachers, all of whom shared the same love, the same aim and the same vision - passing on our passion for music to the next generation.

Want to set up a discovery call to see if our program would suit your studio? 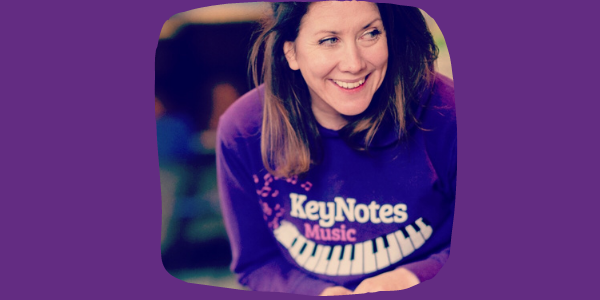 Hello, my name is Melanie Bowes, I support creative piano teachers by providing them with group piano programs for preschool and early elementary children so that they can expand their studios without overwhelming their schedules, learn to teach group piano with confidence, and provide valuable programs for their students. 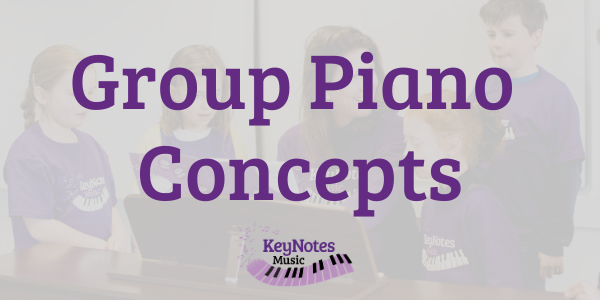 Come and see our Concepts Page

We have put together six videos, covering the most important topics within group piano teaching at the moment! These videos are completely free to watch, we just know you are going to love them! The topics are: